In the pro-life struggle for God and His law, we find happiness -- Our Lady will help us win!

An Appeal for Insistence: 37th Annual March for Life

On the occasion of the 37th annual March for Life, America Needs Fatima joins once again the legions of Americans nationwide who oppose abortion. 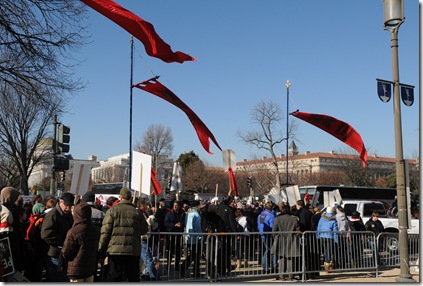 For those who have long fought this important battle, the word “again” painfully stands out. Every year we protest, hoping there will not be another “again.”  And yet, every year, the continued slaughter of innocents makes that “again” ever more necessary.

Why do we insist?  Because our love of God and our consciences will not allow us to do otherwise. However, we also insist because the other side insists so vehemently.

The battle over abortion has proven to be one of the most polarizing issues in our nation’s history. The pro-abortion minority has staked so much on this issue that we are led to ask why they show so much insistence.

Why do politicians risk their careers to support this deadly practice when they would have so much to gain by simply ignoring it? Why does the other side alienate so many women and mothers who they claim to be defending?

The liberal cause would gain so much by temporarily abandoning this thorny issue that so divides the nation. And yet they insist on defending its most horrific manifestations like partial birth or born-alive abortions.

Moreover, these defenders of “rights” have no problem taking away the civil rights of pre-lifers by imposing gag rules and protective bubbles around their abortion clinics. Some take their devotion to abortion to the point of looking the other way, deliberately failing to report cases where minors are abused and victimized by adults.

It is clear that something much greater is involved than just a matter of “women’s rights.”

Abortion: A Necessary Pillar of the Sexual Revolution

There definitely is something much greater. This is not just a case of those women’s “reproductive rights.” There is an ideology behind this insistence.

We must understand that abortion is a necessary pillar of the Sexual Revolution that rocked the country in the sixties and has so devastated the family ever since.

By the distorted logic of this revolution, human sexuality should never be suppressed or disciplined. Our strong sexual desires must be gratified and defined as an inalienable part of the pursuit of happiness. Any and all consensual relationships must be allowed and encouraged—even at an early age and with great frequency.

Tragically, to implement this ideology, there is one obstacle that stands in the way—the tiny and helpless baby whose only “crime” is its desire to be born.

When contraception fails, as it inevitably does, abortion becomes a necessary means to eliminate the inconveniences that bar the way to “happiness.”

What is at Stake

Thus, pro-abortion radicals understand all too well what is at stake. Take abortion away and the whole edifice of the Sexual Revolution comes crashing to the ground. Loose permissive relationships will no longer be possible. People will be forced to deal with their sexuality in the manner which nature prescribes—namely traditional marriage.

Moreover, it becomes patently clear that when dissolute relationships between men and women are called into question, the harmful effects of other destructive sexual relationships must also be denounced.

That is why the promoters of abortion are so radically insistent. They realize that every limitation of abortion—even in its most horrific expressions—is an affirmation that some kind of morality exists to limit their unfettered quest for “happiness.”

There can be no doubt. The real target of the pro-abortion lobby is morality—and the Christianity that upholds the natural law that is its basis.

The Pursuit of Happiness

Tragically, the aging pro-abortion activists do not want to admit the fact that unfettered gratification of sexual desires does not bring happiness.

They do not want to see that on the battlefield of the Sexual Revolution lie the ruined lives of millions of Americans who sought this “happiness” in vain. It is our constant appearance in events like the March for Life that keeps the horror of abortion in the public eye.

Indeed, the ranks of the pro-life movement are full of those maimed and wounded on this terrible battlefield. They have been mugged by the reality that immorality does not lead to happiness.

They and their children are now on the front lines, using every peaceful and legal means to make their voices heard in front of abortion clinics, public squares and capitol buildings all over the county. Their protests and insistent prayers have seen scores of abortion clinics shut down and thousands of babies saved. Young voices join with old in giving joyful public witness and continuity to our repudiation of this shame of our age.

And in this struggle for God and His morality, they have found happiness.

The Fight for Christian Civilization

That is why we are here…again.

This fight for life is more than just a side issue in the political debate. It takes center stage in a greater fight for our Christian civilization.

We must insist because our adversaries will always insist. We must take courage in the fact that our insistence has turned abortion into the vulnerable and shaky pillar that sustains that Culture of Death.

It is our constant appearance in events like the March for Life that keeps the horror of abortion in the public eye.

That is why we must be out there again and again.  In this sense, America Needs Fatima was proud to help coordinate 4,337 Public Square Rosary Rallies last October 10 where tens of thousands of Catholics gathered in public places nationwide to insist upon heeding Honor guard for Our Lady of Fatima in the TFP's ceremonial habit.

Our Lady’s warnings at Fatima as a solution to put an end to abortion and so many other moral evils.

Indeed, this struggle in defense of morality was foreseen by Our Lady at Fatima in 1917. In her message to the three seers, she spoke of immodesty, impurity, and bad fashions. She called men to repentance, reparation and amendment of life.

In face of the struggles we have ahead, we must carry on this cultural battle with an unshakable confidence and determined insistence. It is a fight which is far from over.

However, Our Lady will help us as she has so often in the past. In the end, we have the certainty confirmed by Our Lady herself at Fatima that the final result of our many "agains" will be the triumph of her Immaculate Heart.

Posted by Robert Ritchie at 1:23 PM