An invitation to atheists: love the Mother of God to escape your misery! 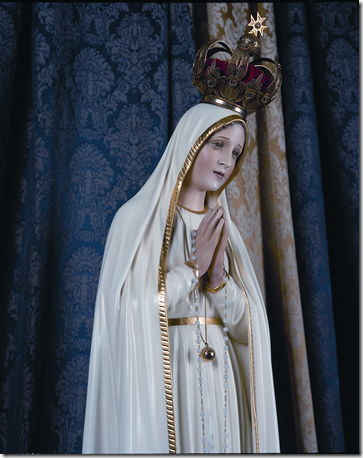 Imagine then that to your spirit - bruised by life, calloused or even wounded, hot with fever - one of those figures appears about which your childhood innocence, dead now for many years, used to dream.

A queen, all majestic and smiling, leads you by the hand into the rays of radiant, peaceful, rainbow-colored light surrounding her in an effort to help you. The atmosphere is of such purity that it seems fragrant with all the perfumes of nature: flowers, incense, or what you will.

And you, dear atheist, let yourself be drawn. You walk gazing upon that figure even more beautiful than the lights enveloping her, and more aromatic than the perfumes flowing from her: magnificent gifts that she receives from an invisible but sovereign source not confounded with her but shining through her.

You recognize how much foolishness there is in the vast ocean of your bitterness. But now it is forgotten. You see that incommensurably beyond the daily sphere, in which your sorrows rage and multiply, there is a sublime and tranquil order of being which you will finally be able to enter. You perceive that only in this higher order will you find that happiness you sought among the worms but which really dwells beyond the stars.

You increasingly gaze upon the Lady, and it begins to seem that you already knew her. You search her countenance trying to identify what it is that seems so profoundly familiar to you. In something, about her gaze, in a certain loving note of affection, in her smile, in some of the assurance that she radiates - rich in implied expressions of affection - you recognize certain ineffable flashes of soul that you saw in the most generous motions of the soul of the earthly mother you had or, if one of the innumerable forms of orphanhood in today's world should have befallen you, of the mother you would like to have had.

You fix your gaze, and you see still more. Not just a mother, your mother, but someone - Someone - who seems to you the ineffable quintessence, the most complete synthesis of all the mothers that were, are, and will be, of all the motherly virtues that man's intelligence and heart can know. Even more, she seems the complete synthesis of degrees of virtue that only saints, flying on the wings of grace and heroism, know how to imagine and approach. She is the mother of all children and of all mothers. She is the mother of all men. She is the mother of the Man.
Yes, of the God-Man, the God who became Man in her virginal womb, in order to redeem all men. She is a Mother defined by one word - mare (sea) - whence, in turn, comes a name, a name that is a heaven: MARY.

Through Her come to you all graces and favors from the divine sun, infinitely superior but seeming to dwell in her (like the sun's rays seem to dwell in stained glass windows). You beg, and you see yourself heeded. You want, and see yourself satisfied. From the depth of the peace beginning to anoint and envelop you, you sense a kind of happiness emerging that is the radiant opposite of that which, until a short while ago, you frantically sought after. This earthly happiness - if you did possess it - you finally cast aside as worn out, blasé, like a child pushing aside toys that are no longer entertaining.

Like a lily arising in a swamp or a spring welling up in a desert, something new begins to appear in the frustrated egoist that you were. This something new is not egoism, the exclusivistic love of yourself, but it is love; love of eternal principles, of fulgurant ideals, and of lofty and spotless causes, that you see shining in the ineffable Lady and that you begin to desire to serve.

Behold the name of your new happiness: To serve, to dedicate yourself, to immolate yourself, and all that belongs to you. This happiness you will find in every thing you formerly avoided: unrewarded good dedication, misunderstood good will, logic scorned by hypocrites or ignored by ears not wishing to hear, confrontation with calumny which at times howls like a hurricane, then discreetly hisses like a serpent, now, finally, lies like a lukewarm breeze loaded with deadly miasmas. Your joy now consists of resisting so much infamy, advancing and overcoming, even though you be wounded, rejected, or ignored. Everything for the service of the Lady "clothed with the sun, and the moon under her feet, and on her head a crown of twelve stars" (Apoc. 12:1), Yes, everything to serve her, and those who follow her.

Perhaps you fear that I may be dreaming and making you also dream as you read these lines, which, in your kindness, you may have imagined delectable. No, I do not dream, nor do I make you dream, nor are these lines magnificent. How colorless they are in comparison with the True Devotion to the Blessed Virgin Mary, by Saint Louis Grignion de Montfort. In this work, the famous missionary of the end of the seventeenth century and the beginning of the eighteenth (whose followers were the "Chouans," heroes of the fight against the atheistic and egalitarian French Revolution of the late eighteenth century) justified, through an impeccably logical reasoning founded on the most solid truths of the Faith, the profile of the sanctity of Mary. He deeply scrutinized the meaning of her virginal motherhood, her role in the Redemption of the human race, her position as Queen of Heaven and Earth, co-Redemptrix of men, and Universal Mediatrix of the graces that come to us from God as well as of the prayers of suffering humanity to Almighty God. In light of all this, the saint analyzes the providence of Mary and shows how the Mother of God has each man in mind, loving each of us with greater love than all the mothers in the world could concentrate on one child.

It was to attract you to the consideration of these great treasures, these great thoughts, and these great truths, that I resolved to write you. At the same time, I fulfilled the desire of several brothers in the Faith, who want nothing more than to have you in their midst, very close…to her.

If grace has designed to bedew my words, you have felt within yourself something like a distant music, so consonant with yourself and with your liveliest aspirations, that one would say it was composed for you, that you felt a thirst for harmony, and that you were born to give yourself to it.

In a word, you are ordered for her, and without her you are nothing but disorder.

And if, in the great harmony of the universe, even the most insignificant grain of sand, the most obscure drop of water, and the lowest and most contorted worm of the earth have their place and their function, will it not be the same with the order of the universe - or, rather, with its highest peaks - that is, the panorama of truths that I have just presented to you through metaphors and that Saint Louis de Montfort deduces, with most sane and firm consistency, from the Catholic Faith, from that Faith which Saint Paul, in turn, defined as "rationabile obsequium" (Rom. 12, 1)?

If all this panorama that orders you and without which you are only chaos is false, then you, like every man, are out of place, a misfit, a - pardon my prosaism - a wart, a excrescence, a cancer, a catastrophe in this universe so supremely ordered. Can you imagine this being true of yourself, of us, of all men, who, as men, are in reality the royal apex of that order?

To believe that this is so, to believe in such a monstrous contradiction placed at the very apex of so perfect an order, is indeed, irrational. It is the apotheosis of absurdity.

Posted by Robert Ritchie at 1:14 PM