The Castle of La Mota: Catholic stability symbolized in stone 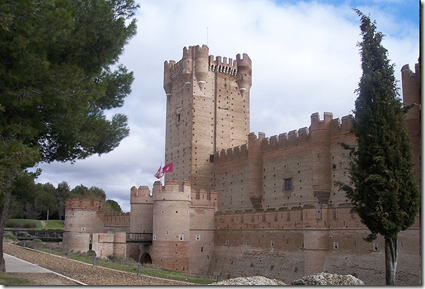 The Castillo de La Mota is located in the city of Medina del Campo (Province of Valladolid, Spain). Sitting atop a small hill or steep rock — mota — it dominates the whole city and its large county.

It was built during the 13th, 14th and 15th centuries upon the remnants of a Moslem fortress of the 12th century. The present castle was ordered built by King John II of Castille in 1440.

At the time of the Catholic Kings (last quarter of the 15th century, beginning of the 16th century) it was fortified and became the best European castle in its class. In it they employed the reddish shingles typical of the region, using stone only in some of its details.

There are three elements in this panorama: the castle, the sky and a tree.

In the castle, which evidently is the dominant note, we find two kinds of elements: the walls, including the turrets that stand out and the great angular wall, which forms the corner or angle of the construction, which is an element entirely distinct from the walls.

Let us begin with the secondary elements: the walls and turrets.

The walls are high, well worked, beautiful, dignified, haughty. But if the whole picture had only these walls, as I see it, it would have nothing extraordinary.  They have the real but frequent beauty of many medieval monuments of this type: there are far more beautiful medieval walls than these.

To my taste, a dark stone, a somber and “stern” granite would express much better all that the wall should express; this somewhat light colored stone, which sunlight makes even shinier, appears festive and not as military as its purpose would require.

As such, the walls do not say much.  They are placid and tranquil, rectangular in shape and without fantasy; the towers are symmetrically placed, simply obeying a military need without any particular aesthetic preoccupation.

By contrast, the tower is high, imposing, and defiant.  It soars way above the walls, making them, as it were, the veil or mantle hanging from a queen’s crown.

It is the truly dominant note.  These turrets on the tower’s corners give it a special physiognomy, and it rises haughty but at the same time sturdy and strong, firm as if saying: I look from above, I defy, I resist.  I fear nothing.

I would almost say: my prow is ready to cut the waves of adversaries like a ship’s prow cuts the seas.  Nothing can make me doubt.  I am ready to resist by all means, at any cost. No one can bring me down.  Not even after being abandoned, isolated and deprived of any military use will I cease to be a living proclamation of the ideals I served.

One would almost say that, beyond the ages, it expects new adversaries to render new services to the same ideals.  For it, time, the abandonment of men, and changing circumstances mean nothing.  It is a tower, and it is there.  It tranquilly awaits the end of the world and does not fear the judgment of God.

It is the affirmation of a state of mind, the tranquil conscience of one who marches toward death and eternity without worrying about it.

That is how I see the physiognomy of this tower.

Again I say: I believe the difference in height and in poetry, fantasy and imagination between the tower and the walls is enormous. The tower stands out.

At the same time, the state of this castle right now conveys the impression of a skeleton burned by the sun.  It appears to have been more or less abandoned, and one perceives that everyday life no longer takes place in it.  Hence it produces the sensation of a shipwreck whose sadness and abandonment is accentuated by the splendor of sunlight.

The light shines on and all nature rejoices, indifferent to the castle’s sadness.  The castle is proud, but at the same time sad.  It has no ruins, but something in it announces the ruin of an order of things that was once inside it.  However, on the other hand the sun and the light give the castle some joy, giving the impression it has a hope of coming back to life.

There is in the castle some melancholy and at the same time a yo volveré (I shall return!) that produce a somewhat undefined impression – you do not know well whether it is one of victory or tragedy.  Deep down, as I see it, it is a combination of both things.

The trees gives the whole landscape some life.  If we imagined the panorama without the tree, that impression of dislocation would be even sharper.  One would say the tree stands like a bit of sap, a certain smile of the concrete life next to the old castle and gives some life to something so burned by the sun that it became stiff.

This is the description.  Could we summarize what we have seen with an exclamation?  In my opinion, it should exalt stability.

During the First World War, General Pétain was defending Verdun, under violent attack; his troops were suffering successive onslaughts by the Germans.  They asked him what he was going to do. He answered, with French concision: J’y suis, j’y reste (I am here, and here I stay).  And in fact all the German waves broke uselessly against the resistance put up by the general and his troops; and they had to turn back.  I would say the same about this castle.

What is it about this formula, J’y suis, j’y reste?  It has gallantry, for in its simplicity it is very lofty and shows stability.  The tower, as it were, looks down on all adversaries but at the same time is firmly anchored in the ground and appears to be saying: this ground is mine, and no one takes me from here.  I stay.

Haughty and firm determination.  This is how I would see the exclamation that is born from this scene.

But one thing is Pétain’s gallantry, another is that of a medieval tower.  It has the resistance and stability not of one man, as in the case of Pétain, but of an era, a civilization, a culture.  It is, in the final analysis, the stability and gallantry of the Catholic faith.

He who does not believe in life eternal is not capable of having this kind of gallantry and stability.

It is not a question of comparing oneself with the adversary to conclude: “I am more;” but it is, so to speak, to touch heaven and exclaim: “The heaven I touch is incomparably more. Here I represent it. I represent God Our Lord. I represent sacrality against the invading hordes of Mohammedans.  Therefore, it is a sacral gallantry and stability.  Sacrality, it seems to me, is more strongly expressed in the tower.

Transcendency can be made by recalling the crusaders were once here. — But where is the Catholic soul expressed?

It is expressed, for example, in the upper part of this tower.  It is very smooth, with crenellations and turrets piling up on its top; and it has something hard to express which lifts up the soul.  And which marks the sacrality of the castle.

The harmonious contrast between gallantry and stability also expresses, in some way, the sacrality of the castle.  Here there is something indefinable that exists in the Catholic soul.  One could say: “O Catholic gallantry, o Catholic stability, o Divine Holy Ghost, stable and gallant at the same time!”

It is a transcendency that goes all the way to the Holy Ghost, with a projection to the future.

Time went by and people began to build towerless castles; and later, naturally, to build no castles at all.  Then, with military art going into the trenches, the warfare of mud and cockroaches begins. [1]