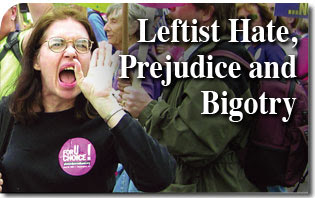 All too often we hear those in liberal media squawking about how conservatives who do not support the homosexual agenda are hateful, prejudicial and bigoted. Any logical argument in one’s defense is immediately met with the question: “How does the homosexual lifestyle affect you?”

Well, it does affect people. One of the most startling examples is how just the mere fact of disagreeing in conscience with the homosexual lifestyle can have dire consequences. Many business owners have opted out of providing services for same-sex “marriage” ceremonies or receptions, only to find that they can be persecuted, sued, fined and even forced to close.

A much more startling case shows just how far pro-homosexual intolerance will go. Jack Fonseca is an IT consultant that works for the Canadian-based Campaign Life Coalition [CLC] where he recently got a taste of the very hate, prejudice and bigotry, repeated ad nauseam, by the pro-tolerance anything goes crowd. When searching for a database solutions company that specializes in non-profits to help one of his clients, Fonseca found the Minneapolis-based company, The Databank.

On the testimonials page, Fonseca even found an endorsement from Sharon Machek from the Ignatius House Jesuit Retreat Center, which seemed to indicate a willingness to work with religious-minded groups. Upon filling out the form for the company’s free online demo, he received an email back from The Databank’s sales manager Bridget Kelly telling him: “Please continue your search for nonprofit software. Our company values are not a good fit for your organization's mission. There is no need to view our online demonstration today. Thank you.”[1]

Fonseca works in the secular realm, and as such, is not affiliated with CLC on an ideological basis. This rejection, however, crystallized him and he wrote back to The Databank in a strongly worded email calling their decision “outrageous.” To which the company’s CEO, Chris Hanson, further asserted Kelly’s position stating that “Campaign Life Coalition positions on just about every issue are in direct contradiction with not only our personal beliefs and company mission, but also many organizations we currently work with. Sorry if you feel offended by Bridget’s response but I’m offended by organizations that seek to violate and restrict the human rights of women, gays, lesbians and others. The only amicable resolution for hate, prejudice and bigotry is to eliminate it.”[2] Sounds like hate, prejudice and bigotry coming from his side of the fence.

Furthermore, if a Christian based company refused to deal with someone based on their pro-homosexual ideals, they would be sued, persecuted and mocked by the media as a pariah. Companies that refuse to be involved in same-sex “marriage” ceremonies can be sued. However companies who discriminate against those who hold opposing views on the matter are given free rein. Thus, to the question as to how the homosexual agenda affects him, Mr. Fonseca can answer that he no longer has the freedom to hold his own opinions without harassment and impediment to his livelihood.