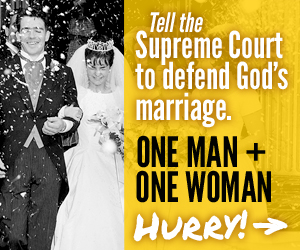 If You Or Anyone You Know Can’t Come To The
Marriage March In Washington, D.C.,

and enter your name.

I’ll add it to our banner and we’ll carry it for you.

You can make a difference on March 26 by joining the March for Marriage in Washington, D.C.

If you can’t be there, sign our banner and we’ll carry your name on it up to the Supreme Court building.

Why is your participation so important?

Because the Supreme Court will be deciding if Proposition 8 -- the 2008 vote that protects marriage in California -- is constitutional or not.

So much hangs in the balance because it will be a Roe v Wade “moment” for marriage in America. For that reason, it is important for pro-family Americans everywhere to join the March for Marriage on March 26.

And that’s why America Needs Fatima will carry your name on our banner.

Add your name to thousands of others on the banner. We will proclaim the truth loud and clear: that marriage is between husband and wife and is ordained by God and as such is sacred and must not be legally redefined -- EVER.

The march is being organized by the National Organization for Marriage (NOM) alongside a broad coalition of pro-family organizations and leaders, including TFP - America Needs Fatima.
I hope to see your name on the banner at the March and thank you so much for everything you do to defend moral values.

And after the March - - - watch your email for a photo collage of the march and the banner along with a PDF of the banner that you can search to find your name.

Yes! Please march for me.

It will be an honor to march for you, for God’s Marriage – America’s Marriage. God bless!

Posted by Robert Ritchie at 2:31 PM