Catholics Defend Our Lord in Manhattan, Protesting a Sacrilegious Film

Friends and supporters America Needs Fatima gathered on the afternoon of Sunday, September 01, 2013 to protest the sacrilegious movie Paradise, Faith being shown at Village East Cinema in Lower Manhattan. 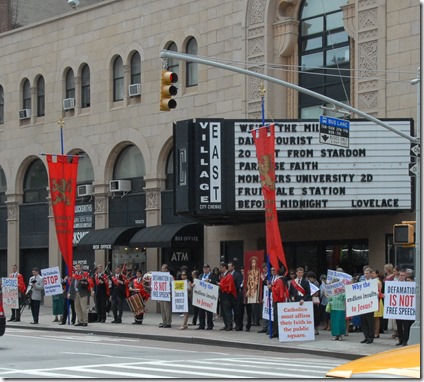 The immoral picture, by Austrian filmmaker Ulrich Seidl, depicts the crucifix of Our Lord Jesus Christ in a pornographic manner. Faithful Catholics united to express their indignation at this outrage and offer an act of public reparation.

Despite very short notice amid the busy Labor Day weekend, more than 60 Catholics made the sacrifice to take a stand in defense of Christ. The participants prayed the Most Holy Rosary, sang hymns and prayed litanies, begging pardon from Our Lord for the offense being rendered by those He redeemed by the shedding of His Most Precious Blood. The TFP’s Holy Choir of Angels band, complete with bagpipes and drums, played several times during the gathering, lifting the spirits of those participating and attracting attention from all sides.

The reaction from passersby varied widely, though the vast majority showed indifference to what was taking place. Dozens stopped to photograph the demonstration, many showing curiosity about the protest by asking questions. Numerous motorists showed support throughout the protest by honking to reject the sin of blasphemy. One gentleman approached and said, “I recently began practicing my faith again. Thank you for taking a stand.”

Contrastingly, one group screamed, “Hail Satan!” as they passed.

The public act of reparation concluded amid high spirits, those in attendance glad to take a stand to defend Our Lord in the public square. Honks in support continued even as participants proceeded to their cars.

May Our Lord have mercy upon our nation, and send the graces of conversion needed to transform America into a land where He reigns as King.

Posted by Robert Ritchie at 3:40 PM