Who Paves the Way for Socialism? 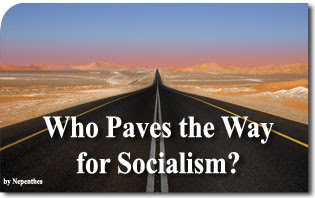 There are many elements in the modern world today that are paving the way for socialism not least of which are materialism and relativism. Those two outlooks on life are not only held by socialists but are often shared by big sectors of the population at large.

Practical Materialism
Since materialism is the root of socialism[1], today’s widespread practical materialism prepares the ground for the germination of the socialist seed.

Unfortunately countless people, even among Christians, live as if there were no eternal life and no reward or punishment after death. Many are only concerned about making money and living for the moment. Countless do nothing but work in order to enjoy life as if it were going to last forever. They could care less that the Law of God is being violated, moral corruption is rampant and that many souls are being lost. All they value is their little world and immediate satisfaction.

Practical Relativism
Where there is practical materialism, there is also practical relativism. Some people admit that truth and error, good and evil exist in theory but practically speaking they have no problem coexisting with doctrinal errors and moral aberrations as if they were fully compatible. For example, one might personally reject abortion or same-sex “marriage,” but coexist with others who advocate and promote these vices with indifference or even favorably.

Others may even profess to be Catholics and at the same time dress like heathens without modesty or decency; they give free rein to sensuality watching immoral movies, TV programs or even pornography.

Compromising Morals for Material or Political Advantages?
Unfortunately even some conservatives, predisposed by this practical materialism and practical relativism, accept or even promote the false notion that one can separate economic principles from moral values. They find it more expeditious to place moral principles aside when focusing on fiscal, economic and political matters.

This vision is entirely distorted. Socialism is much more than an economic and political system. It is also about moral values. It is a secularist, materialist and evolutionist worldview philosophy as well as an ideological movement that aims to transform not only the economy and society, but man as such.[2]

Inherent Contradiction
There is an inherent contradiction in saying that one need not combat materialism and relativism in order to fight socialism. This attitude necessarily leads to socialist advances in the fiscal, economic and political fields. It would be naive to suppose that once having succeeded in gaining inroads in moral and social issues, socialist activists would content themselves with a partial victory and not extend their philosophy to other fields.

Thus, one should fight socialism in all fields. This is only one front in this global war. There is no contradiction between fiscal responsibility and moral responsibility. In fact, one complements the other, as both involve restrictions and personal moral decisions.

Furthermore, restricting one’s action to combating socialism on the economic and fiscal fronts is tantamount to adopting a socialist ideology, which asserts that only material matters are important.

Political “Wisdom”?
Someone might object that, politically speaking, it is wiser to compromise on moral values at times in order to reach an agreement on fiscal matters.

Though all recognize that conservatives have a right to concentrate on the fields of action they feel called to defend, compromise on moral issues is impossible since even fiscal, economic and political matters involve morality as they all are based on human behavior. By agreeing to compromise on moral values, one betrays the principles contained in the legacy given to the Founding Fathers. An America of moral values is the foundation of the nation and especially the bulwark of the conservative movement. From its inception, America has always defended a higher law expressed by the Ten Commandments. If this is abandoned, the nation will perish.

This being so, what can be said of fiscal and political conservatives that accept, support or even promote planks of the socialist agenda such as abortion or same-sex “marriage?” All genuine conservatives should reject such an aberrant contradiction lest they betray their fundamental principles.

In the final analysis, compromising on moral issues leads to the giving up of principles and paves the way for the success of the socialist ideology.