Prince of the Heavenly Host; Powerful Shield Against Diabolical Action 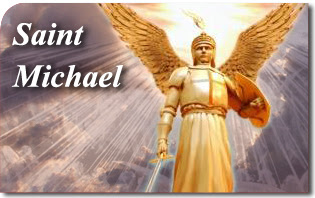 September 29 is the feast of the glorious Saint Michael the Archangel. The Apocalypse thus describes his victorious combativeness in defense of almighty God: “There was a great battle in heaven, Michael and his angels fought with the dragon, and the dragon fought and his angels: And they prevailed not, neither was their place found any more in heaven.”[1]
And Prophet Daniel refers to Saint Michael thus: “At that time shall Michael rise up, the great prince, who stands for the children of thy people” [that is, the faithful Catholic people, heir to the people of Israel in the New Testament] and a time shall come such as never was from the time that nations began even until that time.”[2]

While Saint Michael is commonly referred to as the Archangel, such classification can be generic and not necessarily mean that he belongs to the eighth choir of Angels (Archangels). In this regard, there is an interesting quote from the great Jesuit exegete, Fr. Cornelius a Lapide, born in 1567 in Bocholt, in the Belgian province of Limburg, and deceased in Rome on March 11, 1637.

The extensive work of this distinguished author, who commented on all the books of the Old and New Testaments, is universally admired even today. Special mention should be made of his vast erudition, scrupulous diligence and the bright wit with which he deals with Sacred Scripture. Although new issues have arisen about one point or another of the biblical text, it is undeniable that his magnificent commentaries and scholarly citations still command authority. He writes:

Many believe that Michael, for the dignity of his nature, grace and glory is absolutely the first and the Prince of all the angels. And this is proved, first, by the Apocalypse (12:7), which states that Michael fought against Lucifer and his angels, resisting his pride with a cry full of humility:

“Who (is) like God?” Therefore, just as Lucifer is the prince of demons, Michael is the prince of angels, the first among the Seraphim. Second, because the Church calls him Prince of the Heavenly Hosts that are posted at the entrance of Paradise. And it is in his name that the feast of all angels is celebrated.

Third, because Michael is venerated today as the protector of the Church just as he once was of the Synagogue. Finally, in the fourth place, one proves that Saint Michael is the Prince of all angels and therefore the first among the Seraphim because in his homily, De Angelis, Saint Basil says: “To thee, O Michael, general of the heavenly spirits, placed by thy honor and dignity ahead of all other heavenly spirits, I beseech…”[3]

Posted by Robert Ritchie at 3:54 PM