St. Frances Cabrini was the youngest of 13 children born to pious Italian parents on July 15th, 1850 in Lombardy. 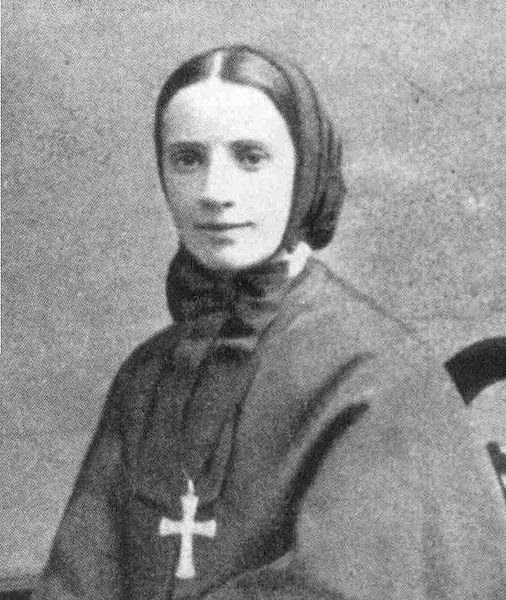 Although of poor health, she had an iron will, especially in perseverance in prayer and in the virtue of obedience.  Her good father daily read the accounts of the saints especially in foreign lands thus developing in Francesca a yearning to be a missionary in China.

Although two convents refused her admission because of ill health, the Bishop of Lodi requested that she manage a small orphanage which was having all sorts of difficulties.  Six years later the Bishop closed the institution and told St. Frances:

“You want to be a missionary.  I know no institute of missionary sisters, so found one yourself."

Along with six girls from the orphanage, the Missionary Sisters of the Sacred Heart was founded.  Mother Cabrini chose for her motto, "I can do all things in Him Who strengthens me".

Besides charitable institutions of all kinds, she founded four great hospitals with nurses' homes attached, convents and schools , 67 institutions in total throughout the United States, South America and Europe.

She crossed the Atlantic Ocean 30 times even though she had a terrible fear of water.  Surely she lived up to the motto she had chosen.

St. Frances Cabrini did have the support of the reigning Popes but things were not always easy.  Many times she faced opposition from clergy and laity alike.  Factions formed against her.  Two revolutions destroyed her Central American convents.  Two lawsuits thwarted her work in Italy.  Yet she was undaunted. When all human help failed, God worked miracles and the needed support miraculously appeared.

At her canonization, Pope Pius XII said, " because of the Will of God, she accomplished what seemed  beyond the strength of a woman."  Among St. Frances" many honors we remember her as the first canonized American saint.

Through Our Lady’s favor, ask Mother Cabrini for the courage and fortitude to always seek and accomplish the Will of God in our lives, and for her heroic trust .