Youssef Makhlouf was born in 1828 in a village in Lebanon, near a grove of cedar trees.  He was the youngest in his family and became a shepherd and would pray in a grotto much as the Fatima children did. 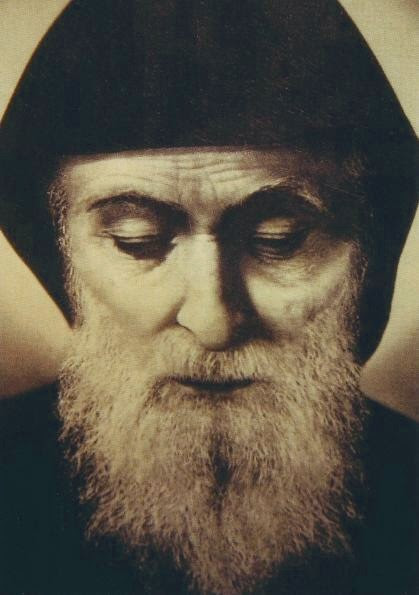 Both parents were extremely pious.  Young Youssef was influenced also by two maternal uncles who were monks.  Often they would tell him: "All here below is nothing, the world is vanity, life is short.  The true beauty is God, near Him there is true happiness.  Wisdom is to not find oneself with empty hands at the supreme hour."

Youssef Makhlouf took the name of Charbel upon entering the monastery and was ordained at age 31.  To the general observer, his life was not extraordinary.  However, his deeds of heroic virtue defy human endurance.

The true purpose of his existence was to be a victim soul in union with Our Lord.  This, he did.  Just before Christmas in 1898, St. Charbel was struck with paralysis as he was saying Mass.

He repeating the following until he died on December 24: " O Father of Truth, behold Your Son , Victim to please You; condescend to approve (this offering), because for me He endured death, to give me life..."

St. Charbel gave his life for the salvation of souls. God was pleased with his sacrifice because after his death, thousands of miracles have occurred.  His body is totally incorrupt and a miraculous healing liquid continually exudes from it. Upon application , this liquid heals both body and soul.

Ask St. Charbel to seek the glory of God before all things, to seek his Will not our own, and to remember that "wisdom is to not find oneself with empty hands at the supreme hour".

Posted by Robert Ritchie at 9:36 AM