Just in from Family Research Council: 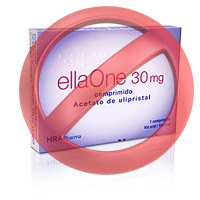 We previously reported that on August 13th the Food and Drug Administration (FDA) approved a new prescription abortion drug called "ella" allowing Watson Pharmaceuticals to market this drug in the U.S. as an "emergency contraceptive" (EC). While proponents of ella claim that it is more effective than the so-called "morning-after-pill," Plan B, ella can also function as an abortion drug more like RU-486. On December 1st, Watson Pharmaceuticals began to aggressively promote ella over the internet and in pharmacies.

Because ella is similar in its chemical make-up to the abortion drug RU-486, it therefore can destroy an implanted embryo, in addition to other modes of action such as preventing fertilization or preventing implantation. Until now the FDA has drawn the line between EC and abortion based on whether a drug prevents an established pregnancy or ends an established pregnancy. Therefore, approving ella as an EC even under their own definition of an abortifacient is doubly misleading.

Because of the FDA's approval of ella as an EC, pharmacists may believe they must cover ella as a prescription drug. However, many pharmacists do not know about the dangers of this drug or that it functions like an abortion. Many major pharmacy chains may not know ella can cause an abortion, and need to be aware of these concerns before they begin stocking this abortion drug. For this, we need your help.

Please send an email to the pharmacy you most frequent, asking that they not stock ella, the abortion drug. Follow this link, where you can select your pharmacy corporation and email them directly. Sample text is provided. Now is the time to let pharmacies know you do not want them providing this drug.

Posted by Robert Ritchie at 3:25 PM