The public rosary this year gave many rally captains in certain parts of the country the opportunity to do more penance than perhaps they had planned on. 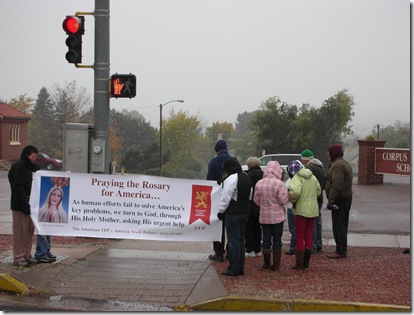 We tell rally captains that Our Lady asked us at Fatima to offer prayers and to make sacrifices for the conversion of sinners.  At the public square rosary the rosary is the prayer and the penance is praying it publicly.

This year those of us who suffered the cold had the opportunity of doing even more for conversions. This was accomplished not only praying the rosary in public but also by praying it in unexpectedly and very cold weather.

In Topeka, Kansas where there were four public square rosaries, the temperature dropped to 36 degrees.  While the turnout was smaller than it might have been had the weather been nicer, the devotion was greater than ever.  Young and old braved the very cold and damp weather and prayed the entire program together.  Sometimes the teeth chattered, but shivering or not, the public rosary was offered in its entirety.  Admittedly it took quite a while to thaw out afterwards, but everyone left happy to have had the honor of participating in such a magnificent event. 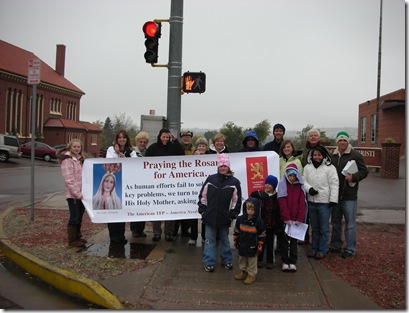 In Colorado Springs, Colorado, twenty brave souls accompanied by a priest, gathered to pray the public square rosary amidst snow, sleet and freezing drizzle.   (Look at the happiness on their faces.  They were probably the happiest people in America on Saturday.)

As people drove by they were astonished if not moved seeing rosary rally participants praying the rosary together in such weather.

May the penance of enduring the cold move Our Lady to grant even more conversions!