FOR IMMEDIATE RELEASE -- On October 28, 2008 America mourned his death; On October 28, 2009 America will be given the chance to celebrate and honor his life; “An American Knight: The Life of Colonel John W. Ripley USMC” is now available for purchase online. 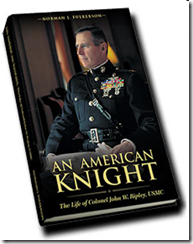 With political and public attention once again focused on the sacrifices made by our military in Afghanistan, it’s more important than ever to remember American heroes who set an example for us all.

“If a young officer or Marine ever asks what is the meaning of Semper Fidelis,” Col. Ripley once told a friend, “tell them my story.”

This is his story!

This book has all the right ingredients to inspire and instill a sense of purpose in a generation seeking honor and meaning. Medal of Honor recipient, Colonel Wesley Fox calls it a, “must read for all desiring to be a leader, especially those desiring to lead Marines.” General Carl E. Mundy, 30th Commandant of the Marine Corps, says An American Knight is a “fine book which provides well-deserved tribute to a great man.”

Most people know only John Ripley warrior, now they will know John Ripley the husband, father, mentor and friend.

The book is in pre-launch phase and will be released on October 28, the first year anniversary of this great hero’s death. While America mourns the passing of this Marine Corps legend, An American Knight will allow us all to do as General George Patton counseled, “thank God that such a man lived.”