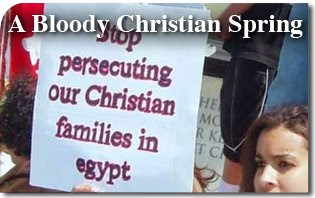 It is a narrative that is accepted without question by so many in the West who want to believe a transformation is taking place. Western governments are quick to offer aid.  In Libya, there is military intervention to safeguard the lives of innocent civilians.

While the Moslem world seems ready to embrace democracy, there are disturbing signs this particular brand of democracy is spelt with an “s” as in shariah law.  Organized radical Islamist groups like the Moslem Brotherhood are jockeying into position to ensure theirs is the dominant one.

However, one disconcerting aspect of the "democratic” Arab Spring is that the very people who complain of oppression are now themselves oppressing and killing Christians.  Indeed this May has proven to be part of a very bloody Christian Spring – and no one seems to be upset about it.

Among recent attacks, one reads of an angry mob of Muslims who threw rocks and firebombs at Christians gathered in Cairo to petition the new regime to reopen nearly 50 churches it shuttered. More than 65 were injured.

On May 8, attackers stormed and set ablaze the Virgin Mary Church in Cairo, shouting: "With our blood and soul, we will defend you, Islam." Twelve people were killed in these attacks and 232 wounded. These and other attacks have all taken place while Egyptian police and troops have done little or nothing to stop the violence which is quickly becoming systemic.

The persecution is not limited to Egypt.

In Tunisia shortly after former President Zine Abeddine Ben Ali’s fall, Father Marek Rybinski, a Poland-born Catholic priest, was murdered on the premises of an inter-denominational school in the Tunis suburban governorate of Manouba. All over the Middle East, the rumblings of revolts heighten the prospects of more repeats of such violence.

Many Christians in the region are considering leaving because they fear radical Islamists have hijacked the uprisings. Syrian Christians say ‘Arab Spring’ changes could hasten their own extinction.

Alas, it seems that it is open season on persecuting Christians not just in the Middle East but all over the world. Persecution of Catholics is happening in Nigeria, Ivory Coast, North Korea, Zimbabwe and many other places.

According to a March report of the Human Rights Watch (HRW), Christians in Vietnam increasingly face charges of national security crimes, severe abuse, property confiscation and forced renunciations of faith.

In early May, there were at least 49 dead, hundreds injured and an unspecified number of arrests in a wave of bloody repression unleashed by the security forces against the worshipers which included several Catholic groups in the Hmong community, an ethnic minority that lives in the northwest of the country and in Laos.


In April, the U.S. Commission on International Religious Freedom (USCIRF) released its annual report, which flagged several incidents of horrific abuses of Christians in China​—​including “disappearances,” beatings, the destruction of churches, and forced “re-education through labor.” The same report also noted that China has found subtle ways of undercutting religious authority, creating divisions and quietly preempting the spread of free religious worship. Indeed, the commission’s report notes that “Chinese officials are increasingly adept at employing the language of human rights and the rule of law to defend repression of religious communities.”

While so many media support the “Arab Spring,” violence against Christians does not seem to move them to action. There is little outcry to defend Christians against bloodshed. There are no military interventions put in place to save persecuted Catholics. No one mentions the reality of today’s Bloody Christian Spring.

Posted by Robert Ritchie at 9:13 AM