Black-out, storm at exact time when miraculous statue is shattered

Although atheists and positivists deny the connection between the natural and the supernatural, the case of a tremendous storm and a black out that took place at the exact moment that the miraculous statue of Our Lady of Aparecida in Brazil was shattered, should make them reconsider their position. 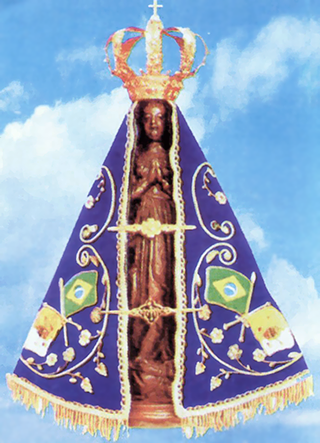 The story goes back to May 15, 1978, when a heretic pastor of the Pentecostal church in the city of São Paulo, São José dos Campos, Brazil, delivered an impassioned plea to his audience, telling them to break Catholic statues. He especially asked the congregation to break the miraculous statue of the Patroness of Brazil, Our Lady of Aparecida.

Please sign this urgent petition to stop a terrible blasphemy on Amazon.com

As a result, a young man, named Rogerio Marcos de Oliveira, devised a plan to destroy the original and miraculous statue of this national devotion of the Brazilian nation.
Rogerio went the next day, May 16, to the city of Aparecida do Norte, entered the shrine of Our Lady, broke the glass encasing of the statue, and shattered it on the spot.

There was a black out in the surrounding region at the exact moment that Our Lady’s statue was broken, and this was followed by a tremendous storm that carried winds so strong that the shops were forces to close up for the day.

Did the black out and storm have anything to do with the breaking of this miraculous statue?

That is something that one should ponder and reflect upon.

Interestingly, when Our Lord Jesus Christ was crucified, darkness covered the land of Israel for some time.

“And it was almost the sixth hour; and there was darkness over all the earth until the ninth hour.”

Sure makes you wonder, no?

Please sign this urgent petition to stop a terrible blasphemy on Amazon.com