PHOTOS: 200 TFP-America Needs Fatima members rally in reparation for blasphemous image of Our Lady of Guadalupe in Oakland

In response to the beautiful invocations to the Holy Face of Jesus, the cry of: “Lord, have mercy” from about 200 persons rose as one voice up to Heaven. 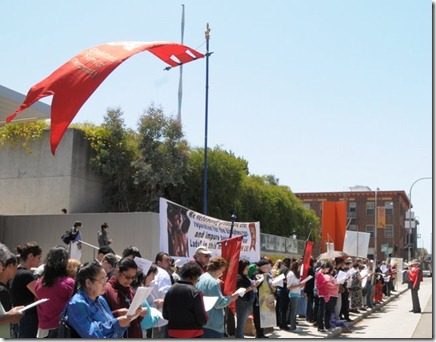 They had gathered in front of the Oakland Museum in California on Saturday, May 21,2011, to vehemently protest the photo of a blasphemous depiction of Our Lady of Guadalupe in a bikini, which is on display there. 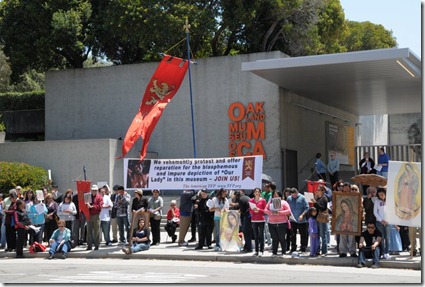 This is the same blasphemous photo of ‘Our Lady’ which provoked the outrage of nearly 100,000 Catholics who protested against it when it was first displayed at the Museum of International Folk Art in Santa Fe, New Mexico, in 2001. 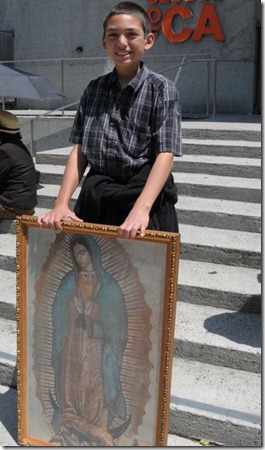 Now, in face of this new blasphemous insult to the Virgin of Guadalupe, Patroness of the Americas, the American TFP and its America Needs Fatima Campaign, organized this peaceful act of protest, which drew friends and sympathizers from all over California who came to say: “we will not be silent!” 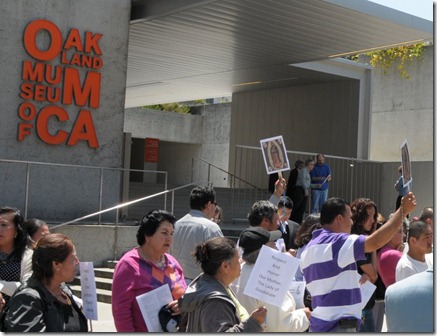 The protestors stood together for two hours beginning at noon, in public prayer and reparation to the Virgin Mary, praying the Rosary, chanting the Litanies, singing hymns.

The Oakland Museum, in a sinister manner – as if to lure the unsuspecting faithful and public at large – placed this blasphemous photo alongside of an exhibit showing the History of the California Missions so that anyone who went in to view that exhibit was lead unsuspectingly to be confronted by this blasphemy .

Perhaps the placement of the photo of “Our Lady” (of Guadalupe) in a bikini alongside the exhibit of the History of the California Missions was done to break the natural shock of repulsion and indignation which springs up when unexpectedly confronted by this blasphemous depiction, while still filled with or in a state of admiration for the richness of the missions’ sacrifices and contributions to society.

Posted by Robert Ritchie at 9:56 AM