Spider-man, Captain America and Superman gang up on America’s youth 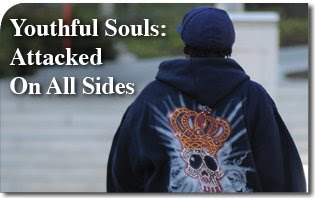 In the ongoing assault on the mentality of American youth, we have to be amazed at the resourceful and relentless completeness of the attack.

Many casual observers, but not all, accept the fact that it is coordinated in all its aspects. Some prefer to see the destructive programs as a series of individual, although malicious, operations such as healthcare and sex education.

During a seminar at a university in Miami Florida in 1976, there was a well-known professor of philosophy from a Texas Catholic school who had excellent conservative credentials, with the exception of one liberal trait: he didn’t believe that the political, cultural and moral evils oppressing mankind were interrelated one with the other.

In fact he abhorred this concept to the degree that he forbade the word “conspiracy” — which he saw as describing that concept — from his classroom.

Prof. Plinio Correa de Oliveira’s monumental study, Revolution and Counter-Revolution, answers that objection in the following manner. Comparing the crisis of modern man to a forest fire, he made the lucid analogy, “When a forest fire breaks out in a forest, one cannot regard it as a thousand autonomous and parallel fires of a thousand trees in close proximity. Indeed everything helps to make the forest fire a single fact, totally encompassing the thousand partial fires…”[i]

The conversion of the barbarians, in what has been maliciously misnamed as the Dark Ages, established Christendom and gave rise to Western Civilization.

A fusion between the classical studies of the Greeks and Romans, especially the use of the Latin Language, with the Revelation of Christ and the monastic schools of the Middle Ages brought about a Christian educational system that lasted a thousand years. This magnificent edifice began to crumble in the eighteenth century with the arrival of the so-called Enlightenment and the French Revolution.

The morality, spiritual development and internal structure of our youth have suffered a proportional decline along with the demise of that edifice in relation to the ascent of Western Civilization. In an article published December 28, 2010, the Wall Street Journal reported that 25% of children and teens are taking prescription drugs on a regular basis with approximately 40 million on anti-depressants, anti-psychotics or ADHD medications.

With some allowance for over-prescribing, that means there are a lot of stressed-out children and families in the country that are leading very unhappy lives.

The trend since the French Revolution has been to remove the teachings of Christ from public and daily life. With morality abandoned, this has had the effect of frequently leaving children with parents, one of which is not biological, if indeed they are married in the first place. Studies have shown this increases high school dropouts, prison incarcerations and suicide attempts.

The damage caused by modern communication systems such as the Internet, iPhones, Facebook and Twitter have received book length treatment by several educators and journalists and should be explored in a separate article. However, the principal objection was expressed well by MIT professor Sherry Turkle who stated in her book Alone Together that technology is threatening to dominate our lives and make us less human by isolating us from real human interactions.

One more citation to show the minefield that children will have to negotiate to reach adulthood appeared May 2, 2011 in a commentary in the Washington Times by Kerry Picket in which he explores the politically correct attitude of some popular comic strip heroes.

In 2008 Spider-man supported Obama and last year a Captain America comic book portrayed Tea Party protesters as villains. Superman takes a more subversive route by renouncing his U.S. citizenship and supporting the policies of the United Nations. No front is left unassailed.

Certainly this coordinated process of destruction is not going to ignore the possibilities of using comic strips to corrupt our youth as the older readers of Al Capp’s Li’l Abner can attest, but to immerse younger readers in the concept of global education that include environmentalism, pantheism among other evils is reaching new depths.

Until the teachings of Christ, for which He paid a heavy price, are restored to their proper importance, the tragic conditions of our youth will continue deteriorate abysmally.

[i] Chapter III: Characteristics of This Crisis However profound the factors that diversify this crisis from country to country, it always has five major characteristics.

1. It is Universal This crisis is universal. There is no people that is not affected by it to a greater or lesser degree.

2. It is One This crisis is one. It is not a range of crises developing side by side, independently in each country, interrelated because of certain analogies of varying relevance. When a fire breaks out in a forest, one cannot regard it as a thousand autonomous and parallel fires of a thousand trees in close proximity. The unity of the phenomenon of combustion acts on the living unity that is the forest. Moreover, the great force of expansion of the flames results from the heat in which the innumerable flames of the different trees intermingle and multiply. Indeed, everything helps to make the forest fire a single fact, totally encompassing the thousand partial fires, however different from one another in their accidents. Western Christendom constituted a single whole that transcended the several Christian countries without absorbing them. A crisis occurred within this living unity, eventually affecting the whole through the combined and even fused heat of the ever more numerous local crises that across the centuries have never ceased to intertwine and augment one another. Consequently, Christendom, as a family of officially Catholic states, has long ceased to exist. The Western and Christian peoples are mere remnants of it. And now they are all agonizing under the action of this same evil.

Posted by Robert Ritchie at 8:53 AM