This Commission is trying to give the protection of the law to 23 Genders!!! 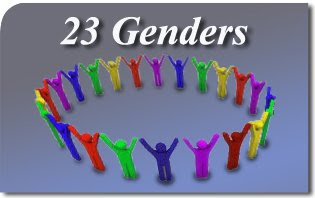 In matters of human sexuality, there are male and female. It is an established biological fact. It is from this fact that comes the family which assures the continuity of the human race. From the family comes society and the State which works toward the common good and perfection of our nature. There is nothing complicated about this obvious fact. It is simply the way things are and always have been.

However, there are those who claim this classification is completely and artificially constructed by society. Humans, they maintain, are not made male and female. Rather, in matters of sexuality, we should all be free to reject the “gender” identity forced upon us and adopt whatever “gender” we want. We are no longer male or female but can choose to be either one or the other, both, and/or neither.

Thus, we have seen the proliferation of behaviors and conditions that now qualify as sexual categories. Gender identity now applies to how one perceives oneself or even how one can surgically change oneself to fit that perception.

What began as a short list referring to homosexual, bisexual has now expanded to include a LGBTQI “community” – adding transgender, questioning and intersexed to the list.
However, that is not the end of the story. Once the floodgate is opened to give official status to any kind of sexual behaviors, there is no limit to the categories and genders that can appear.

Thus, for example, the Australian Human Rights Commission has come up with a listing of 23 “genders” that it feels need protection under the law.1

On this list, beyond the standard LGBTQI listing, one can find transsexual, androgynous, agender, cross dresser, genderfluid, genderqueer, intergender, neutrois, pansexual, pan-gendered, sistergirl and other classifications that are best left unmentioned.

What is clear from the listing is that the whole “gender” debate, which accuses traditional society of artificially constructing sexual roles, is itself artificial and counterfeit. Advocates of this unrestrained sexuality cannot restrain their imagination in expanding the new categories that must be protected, even to the point of taking it to the ridiculous and absurd. They are likewise creative in manufacturing a whole list of phobias (biphobia or transphobia) for those who disapprove of these aberrant behaviors.

Such findings are really not new. They are merely logical extensions of the sexual liberation movement of the sixties. Back then, any kind of free love between a man and women was made socially acceptable. Now, any other kind of sexual relationship must be accepted and given legal protection.

The only thing that is not tolerated is the insistence that male and female define human sexuality. It is not accepted that a natural law and a corresponding morality limits and regulates the strong sexual instincts so that society might perpetuate itself through the family. Essentially, this position holds that the ways of expressing sexuality are unlimited and that each one might define one’s own unique gender category beyond the current 23 and counting gender listing.

One day, when commonsense will again prevail, one might hope that all will return to the beginning when God created male and female.

Posted by Robert Ritchie at 2:48 PM