This saint’s tireless zeal earned him the name of “Hunter of Souls,” and martyrdom by the Cossacks. Today he is Patron of Poland.

Having entered the novitiate of the Society of Jesus at Wilno (1611), he was ordained in 1622, and appointed preacher in the Church of St. Casimir, Wilno. After making his solemn vows, 2 June, 1630, he was made superior at Bobruisk, where he wrought wonders by his preaching and distinguished himself by his devotion during an epidemic of the plague. 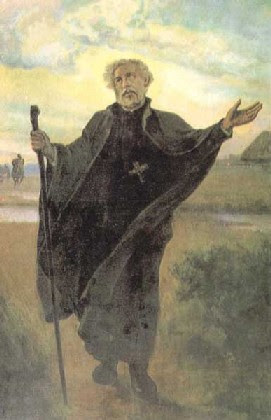 Saint Andrew Bobola earned the name "Hunter of Souls" due to his tireless zeal and missionary travels.

In 1636 he began his work in the Lithuanian missions. During this period Poland was being ravaged by Cossacks, Russians, and Tatars, and the Catholic Faith was made the object of the concerted attacks of Protestants and schismatics. The Jesuits, in particular, had much to endure. Bobola’s success in converting schismatics drew upon him the rage of those in high authority, and the adherents of the Greek Pope decided to centralize their forces in Polesia.

A Catholic nobleman of this province offered the Jesuits a house at Pinsk, and here Father Bobola was stationed. The schismatics vainly endeavoured in every manner to hinder him in the exercise of his apostolic duties, extending their persecutions to attacks upon his person.

On 16 May, 1657, he was seized by two Cossacks and severely beaten. Then tying him to their saddles, they dragged him to Janów where he was subjected to incredible tortures. After having been burned, half strangled, and partly flayed alive, he was released from suffering by a sabre stroke. (cfr. 1907 Catholic Encyclopedia) 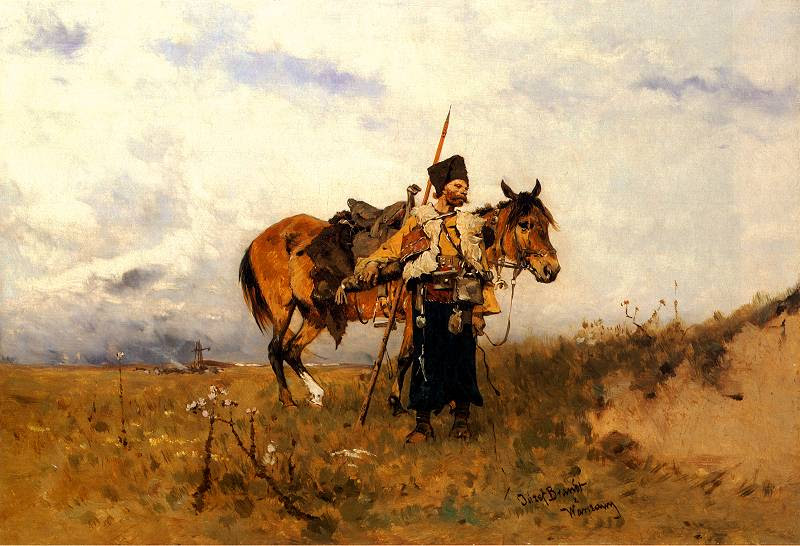 One description of Bobola’s death written in 1865 states:

In the same year, the Cossacks surprised a holy Polish Jesuit, in the town of Pinsk, and conferred on him the palm of martyrdom, on the 16th of May, 1657. Father Andrew Bobola, whose untiring zeal had rendered him obnoxious to the schismatics, had just offered up the holy sacrifice, when a horde of Cossacks attacked the town. On beholding the barbarians, Father Bobola fell upon his knees, raised his eyes and his hands toward heaven, and, having a presentiment that his hour had arrived, exclaimed, “Lord, thy will be done!” At that moment, the Cossacks rushed upon him, stripped him of his holy habit, tied him to a tree, placed a crown upon his head, as did the Jews upon the head of our adorable Saviour, after which they scourged him, tore out one of his eyes, burned his body with torches, and one of the ruffians traced, with his poignard, the form of a tonsure on the head of the venerable Father, and on his back the figure of a chasuble! To do this, the executioner had to strip off the skin of the holy martyr! But this was not yet all. The fingers of the apostle had received the priestly unction. The executioner tore from them the skin, and forced needles under his nails! And during this indescribable torture, the hero prayed for his tormentors; he preached, both by word and example, until the schismatics tore out his tongue and crushed his head! Father Andrew Bobola, whom the Church declared Blessed, the 30th of October, 1853, was sixty-five years of age.  {Daurignac, J. M. S. (1865). History of the Society of Jesus From Its Foundations to the Present Time (Volume II). John P. Walsh. pp. 12–13.}

His body was interred in the collegiate church of the Society at Pinsk, where it became the object of great veneration. It was later transferred to Polosk, where it is still held in honour, even by the schismatics. Father Bobola canonized by Pius XI on 17 April 1938.

His feast day is held on 16 May. Since 16 May 2002 he is a patron saint of Poland and the Archdiocese of Warsaw.