The Annunciation and Saint Gabriel 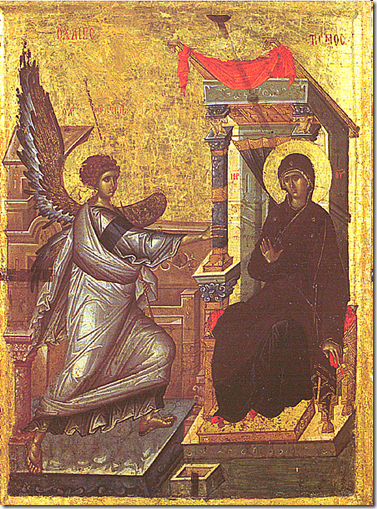 I call your attention to this comment on a passage taken from Saint Luke:

“And in the sixth month, the angel Gabriel was sent from God into a city of Galilee, called Nazareth, to a virgin espoused to a man whose name was Joseph, of the house of David; and the virgin's name was Mary. And the angel being come in, said unto her:

Hail, full of grace, the Lord is with thee: blessed art thou among women. Who having heard, was troubled at his saying, and thought with herself what manner of salutation this should be. And the angel said to her: Fear not, Mary, for thou hast found grace with God.

Behold thou shalt conceive in thy womb, and shalt bring forth a son; and thou shalt call his name Jesus. He shall be great, and shall be called the Son of the most High; and the Lord God shall give unto him the throne of David his father; and he shall reign in the house of Jacob for ever. And of his kingdom there shall be no end.

And Mary said to the angel: How shall this be done, because I know not man?

And the angel answering, said to her: The Holy Ghost shall come upon thee, and the power of the most High shall overshadow thee. And therefore also the Holy which shall be born of thee shall be called the Son of God.

And behold thy cousin Elizabeth, she also hath conceived a son in her old age; and this is the sixth month with her that is called barren: Because no word shall be impossible with God.
And Mary said: Behold the handmaid of the Lord; be it done to me according to thy word. And the angel departed from her.”

As far as I can recall, the only thing we know of Saint Gabriel, the Archangel is found in this episode. He was sent by God to deliver this magnificent message to Our Lady.

We can have some idea of what this archangel is like by looking at the nature of the task he was given. There is a correlation between the angel and his virtue on the one hand, and the mission he receives from God, on the other. Through one, we can make conjectures about the other.

In doing this, He, who is king of the world by right, also became king by conquest. Thus, He – the second Person of the Blessed Trinity – entered the earth to conquer on the cross, in this special way, He established His kingship upon the world. 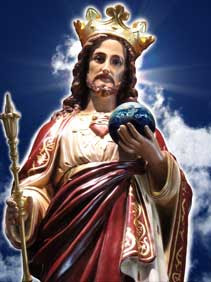 “Behold the king has come! He is going to reign!”

Saint Gabriel must be seen, therefore, as announcing the victorious entry of Our Lord Jesus Christ into humanity. He was like a herald that goes before a victorious king overcoming all obstacles in his way and announcing: “Behold the king has come! He is going to reign!” This is a first view that we have of this archangel.

Another view we must have is that of the devotee of Mary par excellence. He was the one who made the first Hail Mary; he was the one who gave Our Lady a message that revealed to her who she was.

For up until that moment, according to all the interpretations I have read, she did not know she was to become the Mother of God. She prayed for the Messias to come soon to the earth and also that she might become the servant of His Mother so as to render her some small services. That was her great ambition.

When Gabriel the Archangel came and announced that she herself was going to be the Mother of the Messias, he made her, so to speak, understand who she was. His message explained to her why she had continuously received an immense river of graces throughout her life. She understood the depth of the sanctity for which she was called. The angel’s announcement made her comprehend her own mission.

Hence, when he made this revelation to Mary, he rendered Her this outstanding service, which was an act of supreme nobility ordered by God. As a result, this act established a very special bond between Saint Gabriel and Our Lady. In this sense, he was a kind of prophet who manifested to Our Lady what her whole life would be like and what her mission would be. Thus, another aspect of this archangel’s personality is a great union with Our Lady and a great devotion to her.

Finally, we can consider another side, which is the manner in which he gave his message. It was impregnated with a great purity.

No message is more chaste than this one, which announced the virginal maternity. It showed such a love for purity on the part of God, that, in order to safeguard Our Lady’s virginal chastity, He decided on a way to conceive Our Lord Jesus Christ that involved no work of man: She would be the Spouse of the Holy Ghost.

In the Annunciation, the archangel is particularly protective of her purity and chastity. If we were to see him, he would inspire in us a thousand desires and acts of admiration and longing to possess purity to a eminent degree.

From this, we can draw some applications for the prayers we can still address to him today. Saint Gabriel announced the coming and triumph of the Messias to Our Lady and thus to all men. We should ask that he now announce the recovery of God’s effective kingship upon the earth through the coming of the fulfillment of the Fatima message.

Today we are in a situation that is even worse than that of the ancient world before Our Lord Jesus Christ. Therefore, we can ask that Our Lord Jesus Christ reign once again, that He establish His reign on earth in Mary and through Mary, and that this period of darkness in which we find ourselves come to an end. He has done one thing, let Him do the other. He had the key to do it to close the era of antiquity, and thus opened a new epoch. Let Him close this era and open the Reign of Mary.

Second: we should ask Saint Gabriel for an enormous, superabundant devotion to Our Lady and that this devotion grows every instant until the end of our lives.

Third: we should ask him for a most ardent, intransigent, vigilant and therefore most militant love of purity; and to have every form of revulsion and disdain for impurity in every way and degree.

This is what we should ask him. May he thus protect us and bring us closer to Our Lady.