How does the Revolution March?

Let's follow the march of the Revolution in its processive character, its metamorphoses, its outbreak in the innermost recesses of the human soul, and its externalization in acts. 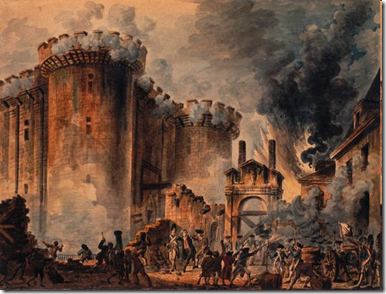 (The storming of the Bastile)

As can be seen, the Revolution has a whole dynamic of its own. We can attain a greater appreciation of this by studying additional aspects of the Revolution's march.

1. The Driving Force of the Revolution

A. The Revolution and the Disordered Tendencies


The most powerful driving force of the Revolution is in the disordered tendencies.

For this reason, the Revolution has been compared to a typhoon, an earthquake, a cyclone, the unleashed forces of nature being material images of the unbridled passions
of man.

B. The Paroxysms of the Revolution Are Fully Present in Its Seeds

Like cataclysms, evil passions have an immense power-but only to destroy.

In the first instant of its great explosions, this power already has the potential for all the virulence it will manifest in its worst excesses. In the first denials of Protestantism, for example, the anarchic yearnings of communism were already implicit.

While Luther was, from the viewpoint of his explicit formulations, no more than Luther, all the tendencies, state of soul, and imponderables of the Lutheran explosion already bore within them, authentically and fully, even though implicitly, the spirit of Voltaire and Robespierre and of Marx and Lenin.[11]

C. The Revolution Aggravates Its Own Causes


These disordered tendencies develop like itches and vices; the more they are satisfied, the more intense they become. The tendencies produce moral crises, erroneous doctrines, and then revolutions. Each of them, in turn, exacerbates the tendencies.

The latter then lead, by an analogous movement, to new crises, new errors, and new revolutions. This explains why we find ourselves today in such a paroxysm of impiety and immorality and such an abyss of disorder and discord.