"If someone were to suffer a sudden disturbance of his eyes, his nerves, or his mind…"

THE famous painting by Velasquez, "The Little Girls", is taken, and rightly so, as one of the great works of pictorial art. 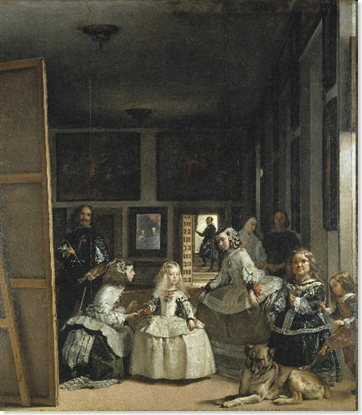 The childish and candid grace of "La Infanta", the most dignified and respectful kindness of the young noble women who serve her, the proud and noble bearing of the Knight of Santiago (which can be seen on the left side of the picture), the self-portrait of the painter himself, the gravity of the other knight in the background, etc., taken as a whole, are expressive of an ambience that is recollected, elevated, and profoundly civilized.

An attentive and prolonged consideration of this masterpiece of Spanish art goes beyond a pleasing of the artistic sensibility; it invites one to a highly formative appreciation of the human personality.

If someone were to suffer a sudden disturbance of his eyes, his nerves, or his mind… 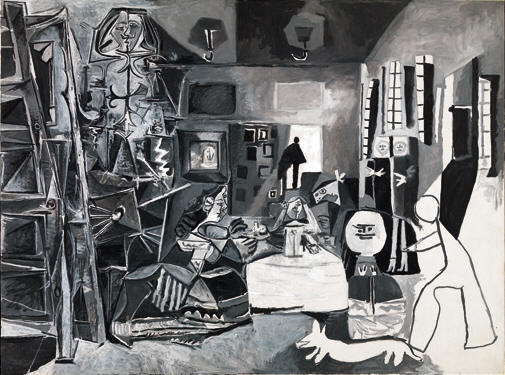 IF SUCH a thing were to happen, then, of course, the harmonies of the picture by Velasquez would go to pieces before him. At the extreme point of this disturbance, he could possibly reach the state expressed in the other photo on this page. The contrary could never occur. If someone were simply to study the second photo, and begin to suffer problems with his sight, nerves, and mind, he would never reach the point of seeing "The Little Girls" of Velasquez. This is so evident that it does not require demonstration. The fact is that the first picture is the product of order, of talent, of culture, of civilization. It shows in its imponderables a profoundly Christian mark.

The second is the fruit of disorder, of extravagance, of imbalance, and of intemperance. It can only proceed from a soul full of disorderly passions or under the influence of an illness. . . .

The second picture reproduces Picasso’s copy of the immortal work of Velasquez. . . . No comment . .

Posted by Robert Ritchie at 8:31 PM