Why we engage in protesting repugnant evil

Sometimes people who wonder why we protest issues as despicable as the V-Monologues, same-sex "marriage" or shows such as "Jerry Springer: The Opera." 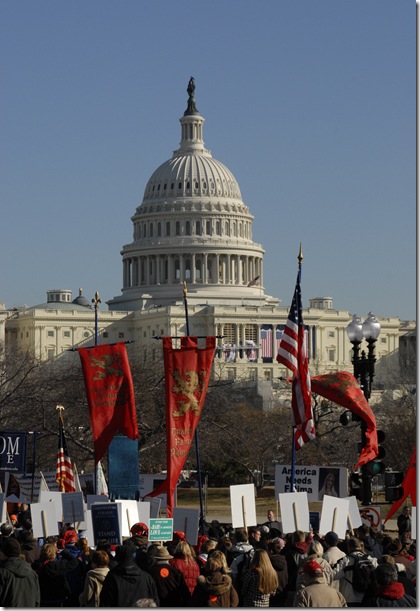 While it is certainly unpleasant to even be near such events, or to address some of these issues, the fact remains, that the Church has a moral position on every human action.  Even something as trivial as eating has a moral aspect to it.

If we eat too much it is gluttony, for example, if we deliberately and culpably deprive ourselves of necessary nutrition for our bodies, such an act can violate the fifth commandment, as our bodies are not our own.  We have a moral obligation to reasonably care for our bodies.

The Church has clear and absolute moral teachings on areas of deviant human behavior, as disagreeable as it may be.

In better times than our own, these topics would never arise in public discourse.  They would be discussed by moral theologians, most likely in latin, and certainly not in coarse language, but they would indeed be addressed.

Sadly, due to the moral destitution that our society finds itself, the enemies of our Holy Faith, have, as a strategy, decided to bring these disagreeable behaviors out into the public.  Why?  So, that they may further insult God and corrupt mankind, including innocent children.

As unpleasant as it is to deal with these issues, we must be engaged in the fight.  Why?  Because the Church has an unwavering position on these issues.

We must defend the honor of God and His Holy Church, when it is agreeable, and when it is not so agreeable.  We must also inform the consciences of those who may be influenced by the public challenges to these moral teachings.

We must strive to protect the innocent by providing a counter-weight to the actions of malefactors.  We must also be a rock of scandal to those who would dare to harm the public by promoting ideas and actions that properly belong in the gutter.

Our strategies in publicly defending these moral teachings of the Church are entirely different than the mud and filth strategies of our opponents.  They want to shock and offend.  We act in the spirit of chivalry, with courage and with moral uprightness.  We do not let the moral filth of the adversary sully us.  We leave the battlefield unscathed under the protection of Our Lady.  When challenged, they leave the battlefield depressed and demoralized, which will always be the outcome between the followers of Lucifer and those of Our Lady!

Posted by Robert Ritchie at 2:40 PM