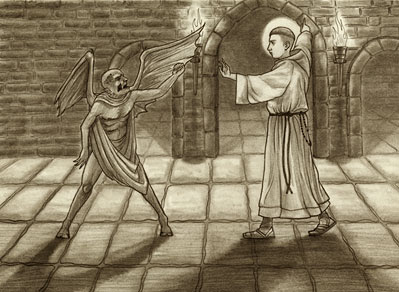 We will now read an excerpt on Saint Leutfridus, taken from the book: Physiognomy of the Saints, by Ernesto Hello.

Extraordinarily holy, but little known, Saint Leutfridus is an example for our mediocre days.

He was born of a good family in seventh century Neustria (present-day France).  He left his family to become a Benedictine priest.  After a great struggle, he founded the Abbey of the Holy Cross. He was gifted with prophesy and the ability to work miracles and was extremely severe.

One day a lady began to ridicule Saint Leutfridus for being bald.  The saint replied: “Why do you poke fun at my natural defect?  From now on, you will have no more hair on your head than I have on my forehead, and neither will your descendents.”

Coming across a man working in a field one Sunday, Saint Leutfridus raised his eyes to Heaven and prayed: “Lord, make this land eternally sterile.”  From then on, neither grain nor wheat was ever seen in the field again.  In its place, there were only thorns and thistles.

These are magnificent stories!

Saint Leutfridus had an abundant zeal for justice, but was even more ardently merciful.

This principle is important.  Saint Leutfridus was both just and merciful.  These two virtues must go hand in hand.

Saint Leutfridus was even ardently charitable while angry and when reprimanding…these were parallel lines of his life.

When one of his monks died, his brothers found three coins in his pocket.  This showed that the deceased had violated his vow of poverty.  Upon learning this, Saint Leutfridus ordered that his body be buried in profane ground.

Afterwards, he made a 40-day retreat, praying and weeping for the soul of this monk, who seemed lost.

Those whose piety is merely sentimental would not understand this.  Confronted by this situation, they would pray: “Oh, poor man, grant him pardon,” and consider him saved.  On the contrary, Saint Leutfridus ordered him to be buried in profane ground and then made a retreat, begging for the monk’s salvation.  Our Lord, Himself, possessed this combination of sternness and mercy.

After these days of retreat, the Lord revealed to Saint Leutfridus that His mercy had saved the monk’s soul, even though His justice was prepared to condemn him.

During the interim between death and salvation, the monk was in a type of limbo.  Then Saint Leutfridus made a retreat, did penance and the man was saved.

Someone could wonder how this was possible since the man was already dead and judgment takes place immediately when the soul separates from the body.  It is hard to say, but we cannot put limits on God’s mercy.  Perhaps He left the monk’s soul fused to his body, waiting for the sacrifice of Saint Leutfridus. In any case, this story clashes with the liberal idea that the monk would be automatically saved.

Saint Leutfridus was tremendously wrathful against the devil.

Often, people react to temptations by becoming afraid of the devil, but I have seen very few who react with holy hatred and furiously fight against him.  We should all strive to attain this holy wrath.

When Satan approaches, we should be filled with anger and hatred, because the devil is the declared enemy of God and our souls.  He wishes us every form of evil.  Thus, when we are tempted, we should react with militant execration, like Saint Michael did.

Once, a friar called Saint Leutfridus from his cell to tell him that the devil was appearing in the chapel.  Recognizing his old enemy, the saint ran to the Chapel and made the sign of the cross over the doors and windows, which closed, blocking all the exits.

Wisely, he captured the devil first, so that he could not get away.

Advancing towards the devil, the saint furiously beat him.  The devil wanted to flee, but all the exits were blocked.  Normally, he could have instantly left the body he had taken up, but apparently he had not permission to do so.  God wanted to humiliate him further under Saint Leutfridus’ blows.

This is a splendid scene.  The beating was physically given and spiritually felt, all under the Sign of the Cross.  Just as the wicked souls are burned by Hell’s material fire, so too the devil’s soul was made to feel the saint’s blows.

Saint Leutfridus beat the body that was merely a doll of the devil.

Naturally, these blows tormented and humiliated the devil.  We too can increase his torment.  This is particularly excellent when Satan provokes an attack.  Then, the counter-attack gives glory to Our Lady by showing that her children’s hatred of the devil is greater than his hatred of men.

God obliged the devil to flee by way of the belfry, so that he would feel his defeat more sensibly.

The devil was forced to flee by way of the tower, under the continued blows of Saint Leutfridus.  We would love to have seen the saint deliver the final blow!

We can imagine the scene: Saint Leutfridus is an old man with white hair and a white beard, but still fit and possessing chestnut eyes.  He is very strong and beats the devil with utter hatred, yet maintains perfect serenity.  All the while, the devil’s doll, moaning and writhing, retreats from sight, by way of the belfry.

Since we only fight and struggle as far as our anger propels us, just wrath is important.  We should strive to develop a holy wrath against the devil that is always vigilant and never sleeps.

Just as a mother with a very sick child sleeps with a wakeful heart, we too should sleep with our hearts in a state of continual vigilance.  We should be able to proclaim that even while asleep, we remain a living torch of hatred against the devil.

Thus, we will be able to say: “I sleep, but my heart looks in hope for an occasion to give greater glory the Blessed Virgin.”