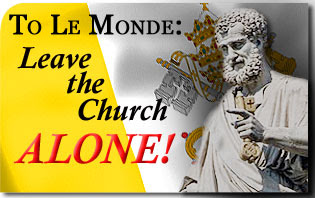 On March 18, Le Monde newspaper offended millions of Catholic worldwide when it published a sacrilegious cartoon depicting Our Lord handing out condoms from a boat to the excited masses.

The attack of Le Monde was one of many in response to a statement by Pope Benedict XVI during his trip to Cameroon where His Holiness reaffirmed Church teaching about chastity and use of condoms.

An angry and bitter chorus of liberal anti-Catholic voices is sweeping Europe. Le Monde is at the tip of the iceberg with this most violent expression of hatred against Catholic morality.

Please send a protest email message to Le Monde asking them to leave the Church alone by clicking here.

Posted by Robert Ritchie at 3:21 PM