Bishop Salvatore Cordileone: Homosexual ‘Marriage’ Is Not a Live-and-Let-Live Matter 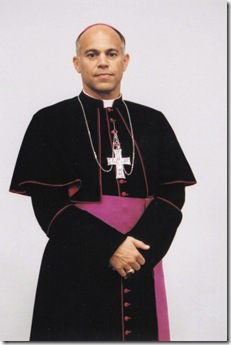 Shortly after the passage of pro-traditional marriage Proposition 8 in California in November 2008, Crusade’s associate editor Michael Drake interviewed Bishop Salvatore Cordileone. Serving as auxiliary bishop of his native San Diego, Calif., Bishop Cordileone is also a member of the episcopal advisory board for the Institute for Religious Life.

Crusade: If homosexual “marriage” were implemented, how will it affect the Church, Church-affiliated organizations and other non-profit organizations? 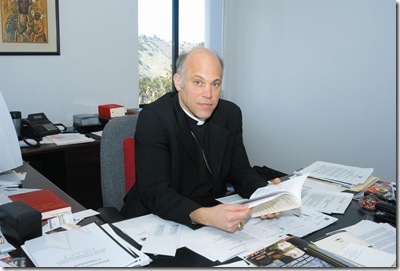 Bishop Salvatore Cordileone: It’s not a matter of live and let live.  Actually, that is the situation that exists, according to their idea of tolerance regarding domestic partnership laws. There are two ideas of marriage on the table that are exclusive in our society. We are struggling over which one is to prevail for they cannot co-exist.

One idea is the way it has always been understood in every human society since the beginning of civilization, that is, a life-long union of a man and a woman in mutual lasting fidelity for the procreation and the upbringing of children, and the mutual good of the spouses. Society has an interest in it because for it to flourish, citizens have to be virtuous. Children learn virtue primarily in their families, secondarily in their educational and faith communities.

That is the idea of marriage, how it has always been. That is why it has a special status in law. There is no other relationship that has the same status as marriage. There are other types of beautiful human relationships such as the relationship of friendship, between parents and children and between a pastor and his flock. Those are all beautiful, lofty human relationships. But marriage is different from everything else.

The other idea of marriage is that it can be whatever way you want to define it, and therefore there is no moral difference between so-called homosexual “marriages” and heterosexual marriages, and anyone who thinks differently is a bigot and you will be treated like one.

Crusade: Do you foresee any type of a gag rule or prohibition on speaking Church teaching and preaching; opposing homosexual “marriages” from the pulpit or otherwise?

Bishop Cordileone: It would seem to be a long shot. But I would not consider it impossible, because it has already has happened in Sweden. A Lutheran pastor was arrested there and sentenced to jail for preaching from the pulpit about it. At least one bishop in Canada was forced to take a pastoral letter about the sanctity of marriage off the diocesan Web site. There will be “hate speech” laws used against us. Can they get as far as the pulpit? I would not say that it is certain, but it is possible.

Bishop Cordileone: There are certainly philosophical links. Those of us who have studied this know that the beginning of the erosion on this subject was the contraceptive mentality, divorcing procreation from the conjugal act. Sex is reduced to something only for pleasure. I even read that recently in some newspapers explicitly stating that. One, in particular, was criticizing the Mormons, since they don’t believe in contraception either. This columnist simply could not believe that anyone would look at sex other than for recreation. If it is done purely for recreation, there are no limits. Anything that gives pleasure is “legitimate.”

Crusade: A little bit about the backlash, the violence we are seeing being perpetrated on those who support traditional marriage. Should there be a response to that? How do we respond to it?

Bishop Cordileone: There should be a response to the hatred and violence. There is much to say about it. It is a concern as to what the other side really wants. They are the side that is preaching about tolerance, but they are the most intolerant when they don’t get their way. They speak about this “taking away of a fundamental right,” but how can a created right that never existed before be fundamental?

Posted by Robert Ritchie at 4:16 PM