Say No to Jerry Springer: The Opera at the Boston Center for the Arts

Perhaps it is easier to list what is not attacked in this brutal ridiculing of the Catholic faith. The production is called Jerry Springer: The Opera and its New England premiere is on May 1 at the Boston Center of the Arts (Caldwell Pavilion) in Boston. 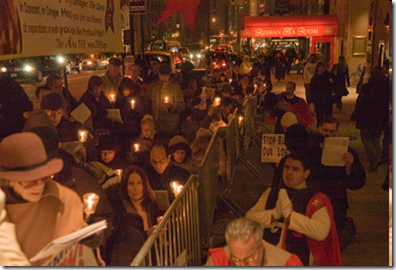 (This picture is from the act of reparation for the blasphemies in "Jerry Springer: The Opera" that took place in New York City in front of Carnegie Hall on January 29, 2008)

America Needs Fatima asks you to join a peaceful and prayerful protest outside BCA on Friday night, May 1, from 6-8:30 p.m.

The “opera” defies description in detail since it contains so much nudity and blasphemous content. Some examples include:

Throughout its history, the “opera” has earned its blasphemous reputation. In London, the debut was the subject of a libel suit for defaming Christians. When it was to be aired on the BBC, it drew more than 60,000 complaints. In face of such insults to the Faith, Catholics cannot remain silent. Please attend the public act of reparation: