Report on today's campaign for traditional marriage in Carlisle, PA 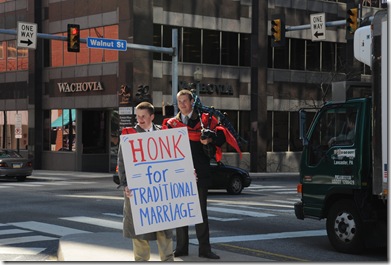 (Picture of TFP members in Harrisburg, PA, campaigning in favor of traditional marriage.)

From the Sentinel Online

A group of men from The American Society for the Defense of Tradition, Family and Property (TFP) stood on two corners of Carlisle’s square today, holding banners and American flags and urging drivers to honk if they support traditional marriage.

John E. Ritchie, 34, of Spring Grove, was handing out pamphlets titled “10 Reasons Why Homosexual ‘Marriage’ is Harmful and Must be Opposed.”

Posted by Robert Ritchie at 4:29 PM