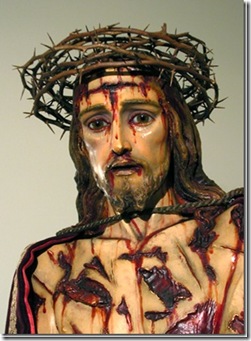 (Our Lord is not only the Lamb of God, but the Lion of Judah as well.)

Thank you for sending your protest message to Le Monde, the largest newspaper in France.

The cartoon targeted the Pope too. He was depicted as a decrepit old man who says: “Anything goes!”

In yesterday’s Le Monde, an article titled Sacrilege! by the paper’s Ombudsman reports on the size and tone of the protest, calling it “a hurricane, a tsunami of protests.”

The Catholic protest was launched in an email blast sent by the student branch of the American TFP, TFP Student Action to its student activists nationwide on the evening of March 19. The protest was placed under the protection of Saint Joseph, whose feast day we celebrate on that day.

The next day, on March 20, another email blast with a copy of the same protest message to Le Monde was sent to the members of the American TFP email list.

The following week, on March 24, America Needs Fatima sent a copy of the protest message in an email to its members.

Thank God, the email struck a receptive cord in the hearts and souls of Catholics nationwide and thousands of Catholics response immediately, sending their own messages of protest to Le Monde. Catholic groups picked up the protest in the United States and abroad.

Le Monde said the tsunami of protests arrived by the hundreds, then by the thousands, finally reaching a peak of 500 email messages an hour, which clogged up their server and made it necessary to reroute email traffic to a new server to avoid a crash.

In other words, all in all, Le Monde received tens of thousands of protests since March 19. The cartoon’s author said this was the largest protest he had ever seen. Not even his cartoon showing Pius XII making a Nazi salute had provoked such an uproar.

Next, Le Monde transcribes samples of the protest messages they received from around the world. Some were simple expressions of Catholic piety; others mentioned dire consequences for the souls of the publishers. One person wrote:

“Don’t you realize that you attract the wrath of God upon the world?”

This explosion of Catholic ire caused Le Monde to say that Catholics need not take lessons from anyone on how to launch an effective protest and states that “The lambs of God can bite.”

They forget that Catholics take their example from Our Lord, Who is the Lamb of God and the Lion of Judah too.

Unfortunately, however, the people at Le Monde did not apologize for publishing the sacrilegious cartoon, nor did they pledge to stop offending God, the Papacy and the Catholic Church again.

But since “the lambs of God can bite,” as they said, they may think twice about attacking Our Lord and the Pope in such sacrilegious terms in the future. Moreover, we pray that their troubled consciences and the thought of God’s Justice may prevent them from doing it again.

But most importantly, the tsunami of protest and prayer from Catholics worldwide was an act of reparation raised to the Throne of God, through the intercession of Saint Joseph and Mary Most Holy. Despite our miseries and faults, we hope that this act of reparation washed away the stain of the sinful and sacrilegious cartoon and brought new graces of conversion and Catholic courage to France, the first born daughter of the Church.

The spiritual war for souls is far from over. That is why you are encouraged to again contact Le Monde and to express your opinion of the cartoon by writing to:

Here’s a sample message that you may find helpful:

The cartoon targets the Pope too. He is depicted as a decrepit old man who says: “Anything goes!”

I do not accept this warped and portrayal of Our Lord, the Pope and Catholic morality. In response, I demand that you apologize for the cartoon and pledge never to publish such offensive material again.

With a heartfelt prayer for your conversion, and for the spiritual and material wellbeing of France.

Posted by Robert Ritchie at 9:17 PM