TFP and America Needs Fatima speak out against access to pornographic materials at the public library in Topeka, Kansas...

The feast day of St. Joseph was a perfect day to rally in defense of the innocence of children at the Topeka Shawnee County Public Library in Topeka, Kansas. 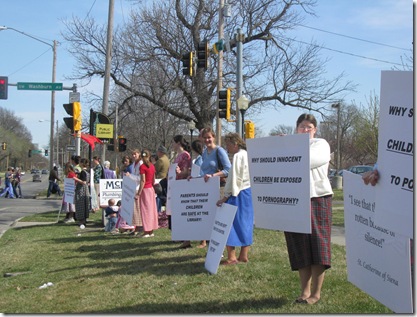 One of the titles of St. Joseph is, “Protector of the Holy Family.” 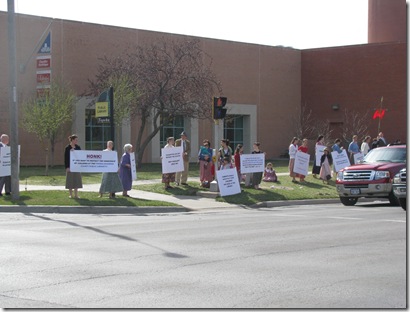 How appropriate, as the family is under assault everywhere in America.

TFP and America Needs Fatima supporters and friends gathered in front of the library to speak out against access to pornographic materials at the library.

Some of the signs read, “Honk, if you want to protect the innocence of children at the Topeka Shawnee County Library", Cigarettes are kept behind the counter, why shouldn’t smut be?", and, "Pornography is not a family value”. 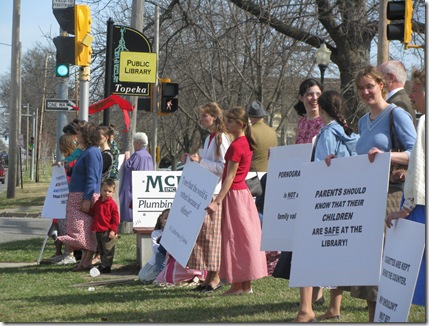 At the last board meeting, a majority of board members courageously voted that four volumes, whose offensive titles I won’t even mention, be restricted, so that minors would not have easy access to them. These volumes contain explicit pictures as well as immoral content.

To any decent-minded person, this would seem to be entirely reasonable.

However, those who push and promote homosexuality and immorality are opposed to innocent children being protected from such mortally damaging trash. They believe this to be a “freedom of speech issue.”

Of course what they mean is freedom or license to sin and to sin grievously. Not only that, they seem to desire the corruption of little children who might stumble across one of these shocking works.

While it would be welcome if it did, the library board’s decision would not remove the books, it simply would restrict access to them. How can anyone be opposed to such a measure?

Tragically, but not surprisingly, there are liberal attorneys, librarians etc. who are horrified that children would not be able to have open access to these books.

The rally was held to encourage and to support the library board’s decision and ask them to hang tough at their board meeting that took place at the same time.

Of course the usual response of the left occurred when the good exercise their free speech rights. The police were called. Library staff came out to take many photos. The good held firm and took their rally to the very end.

Hundreds honked their horns in support of the rally. At a certain point, a woman walked up to the rally and gave one of the participants a note of support. In her note, she wrote how her child was damaged by the pornography that was accessed at the library. She also wrote, “I absolutely agree with your position on this issue. Thank you!” 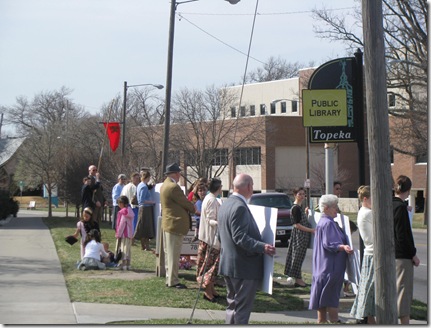 The highlight of the rally was when a big Topeka Fire Department truck drove by repeatedly honking his horn, which was heard for blocks.

Thank God for that! 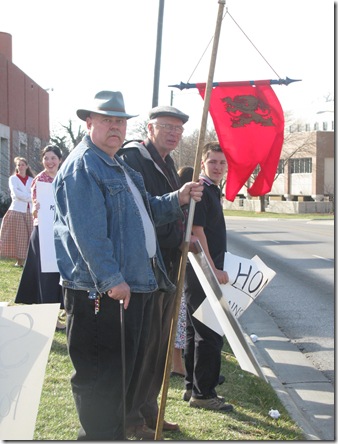 Perhaps this will start a trend of the public more closely examining what kind of “materials” are within easy access to their children at their local libraries supported by their tax dollars.

At the close of the rally the Litany of St. Joseph was prayed. So far, the board has not backed down. You can be sure that our supporters and friends will be keeping a watchful eye on what transpires in the future.

Posted by Robert Ritchie at 3:07 PM