“Catholic Action: Why the Need?”

The setting for the first conference was Grand Coteau, one of the Louisiana’s charming historic towns.

Land of the Acadians


The first talk of the day was by Cesar Franco of TFP Student Action who showed with slides and video clips of what it was like to defend traditional marriage on Berkley campus or on the streets of Hollywood.

The detailed narrative of Saint Joseph’s Caravan to defend traditional marriage in California recounted the overwhelming support of most Californians for traditional marriage and the hostile and even aggressive expression of hatred by proponents of same-sex marriage. Covering 8000 miles, the Saint Joseph Caravan visited the length and breath of the Golden State as well as Arizona and Florida.

Michael Drake gave the second meeting, “Guaranteeing the Future of Our Catholic Heritage,” He looked at the need to defend Christian civilization in face of the changing circumstances of the Cultural War. He described the need to know exactly what values need to be defended and which need to be opposed.

A delightful and tasty lunch buffet was prepared at Catahoula’s Restaurant, just a leisurely stroll from the conference hall. With azalea bushes in full bloom and sunshine streaming through the trees, the relaxing walk to and from the restaurant gave everyone ample opportunity to discuss the morning talks further. 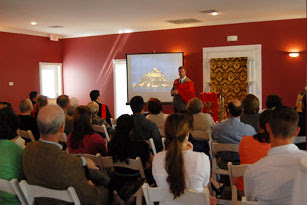 The afternoon session started with Mr. Thomas Drake’s explanation of “Why the TFP?” He described the historical and philosophical forces involved in the gradual destruction of our Christian culture. Drawing on the analysis of Prof. Plinio Corrêa de Oliveira in his book, Revolution and Counter-Revolution, Mr. Drake outlined historical transformations in the thinking of Western man.

He also gave a synopsis of how the TFPs came into existence due to this decline of Christian culture and civilization, and what they do to actively preserve and restore the foundations of a Christian society.

Mr. Michael Drake gave the final presentation of the day, “The 2008 Public Square Rosary Rallies – What Did They Achieve?”

He presented slides from some of the 3,500 Rosary Rallies held coast to coast on October 11, 2008, with a near total of 120,000 Americans joining in prayer. From Hollywood to the steps of the Supreme Court in Washington DC, the variety and scope of the rallies held the audience spellbound.

Most present at the regional conferences had participated in these rallies and it was exciting to feel oneself part of such a growing movement of Catholics taking their prayers and faith to the public square. The closing pictures of this wonderful presentation were from Fatima, Portugal where a TFP – America Needs Fatima delegation presented 3,500 red roses and a banner carrying the name of each Rosary captain to Our Blessed Mother on the very site of the “miracle of the sun” in 1917 on the same weekend the rallies were being held in America.

Although a full day of informative, entertaining, and useful talks, the joyful conviviality continued long after the conference was officially over.

On Sunday March 22, the first New Orleans Regional Conference took place at the Hilton Hotel. In as traditional an ambience as can be found in the Deep South, the participants of this gathering, shared in nearly the same discussions and presentations as were held in Acadiana. Even the hotel staff was enthralled with the grace-filled atmosphere at the conference.

Student Action
On Monday, March 23, TFP Louisiana held a campus campaign at the University of Louisiana in Lafayette. When they ran out of flyers on “10 Reasons a Student Should Oppose Abortion,” TFP members handed out an even more controversial flyer titled “Ten Reasons Why Same-sex “Marriage” is Harmful and Must be Opposed.”

Reaction ranged from enthusiastic support to obscene slogans directed at TFP members. As the 2,000 flyers circulated through the campus, debates and discussion ensued showing the need of Catholic students…in action.

Posted by Robert Ritchie at 8:47 PM